The Basis for Antimicrobial Activity of Allicin

The Basis for Antimicrobial Activity of Allicin

Basis for Antimicrobial Activity of Allicin

After it was clearly shown by that allicin is almost exclusively responsible for the antibiotic properties of garlic, the question of the mechanism of allicin’s antibiotic activity arose.

The fact that a compound possesses antimicrobial activity is based on two principal features. Firstly, the compound must be able to reach potential targets and, if these are intracellular, that means it must be able to get inside the microbial cell. In the case of bacteria, an antibiotic has to penetrate the bacterial cell wall and the cell membrane. In addition to these two boundaries, the slime layers or capsules of certain bacteria can constitute an extra layer of resistance. Following the arrival of the antibiotic in the cell, it must have a target that, if attacked, leads to cell inactivity or cell death. Miron et al. investigated the permeability of artificial and natural phospholipid membranes to allicin and demonstrated that allicin readily diffuses across these membranes.

When allicin is inside the cell, the antibiotic efficiency depends upon reaching and reacting with its targets and on the importance of those targets to the cell. In a seminal study, using logic that has stood the test of time, Cavallito and coworkers investigated the chemistry of several plant-derived antimicrobial compounds. It was found that the active principles of Allium sativum, Erythronium americanum, Asarum reflexum, Arctium minus, Ranunculus acris, Ranunculus bulbosus and of Brassica species as well as the non-plant-derived antibiotics penicillin, citrinin, gliotoxin, clavacin and pyocyanines react with cysteine. Pretreatment of these antibiotics with cysteine led to a total loss of activity against bacteria. The different antibiotics were categorized into groups depending on their reactivity with cysteine residues. The antibiotics were tested with cysteine residues that differed in their chemical microenvironment. In summary, certain antibiotics (group I, e.g., allicin) reacted with every cysteine residue independently of the neighbouring groups, as long as the –SH-group was freely available. Another group of antibiotics (group III, e.g., penicillin) showed increased reaction kinetics with cysteine if other amino-groups were adjacent to the cysteine residue, but much slower reaction kinetics if not. Pyocyanines (group II antibiotics) turned out to be in between, since they showed intermediate reaction kinetics with the cysteines tested. These experiments were prophetically significant considering the present state of knowledge on the effects of surrounding amino acids on the micro pKa values (and therefore reactivity) of cysteine residues in proteins to oxidation. Furthermore, Cavallito’s group speculated that the lower efficiency of allicin compared to penicillin and other antibiotics could be explained depending on their reactivity with cysteine residues. Since allicin reacts readily with all free cysteine residues available, it is buffered by proteins and low molecular weight thiols, independently of their importance for cellular viability. On the other hand, it was speculated that the specificity of penicillin for cysteine residues in the vicinity of amino-groups would lead to less waste of penicillin on unimportant targets, therefore making it more efficient than allicin. Several case studies have subsequently reported the reactivity of allicin with thiol-containing enzymes. For example, Wills used allicin to inhibit the activity of several enzymes in vitro. Among them were important enzymes for primary metabolism like succinic dehydrogenase, hexokinase, triosephosphate dehydrogenase or alcohol dehydrogenase.

But it has to be stated that some enzymes which did not contain a thiol group were also inhibited by allicin, whereas a few enzymes containing a thiol group could not. These findings suggest that not only cysteine is a potential target for allicin. The fact that some enzymes, although containing thiol groups, are not inactivated by allicin could be explained by an adverse pKa of these cysteines which depends on the microenvironment within the protein, so that the reactivity of these cysteines with allicin is very weak. Rabinkov et al. investigated the reaction of cysteine with allicin using RP-HPLC and NMR-analysis of the resulting products. It was shown that allicin reacted with the sulfhydryl-group of cysteine via a disulfide exchange-like reaction (Figure 2B, unstressed situation shown in Figure 2A). By demonstrating that enzymes that are irreversibly inhibited by allicin can be rescued by strong reductants, the idea of the disulfide exchange-like reaction was transferred to a working model of enzyme inhibition by allicin via the same mechanism. 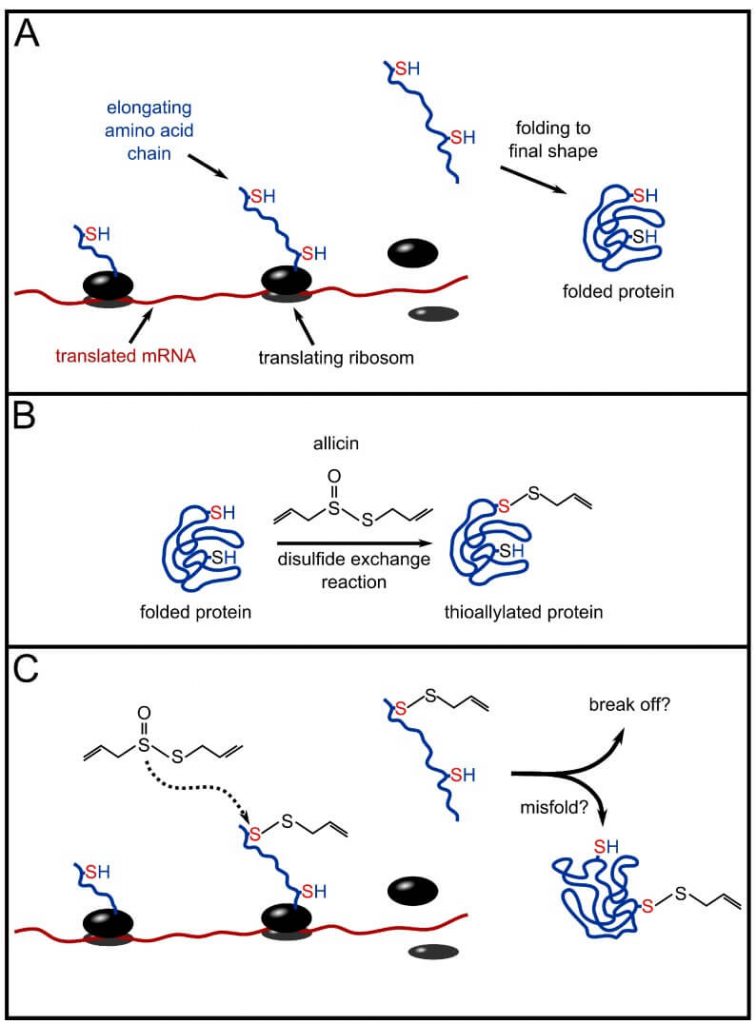 Possible influence of allicin on proteins and protein synthesis. (A) protein synthesis in unstressed conditions. After translation the protein is folded into its final structure. (B) The cysteine residue that is accessible for attack (indicated in red) reacts with allicin via a disulfide exchange-reaction. The cysteine residue that is sterically blocked (indicated in blue) does not react with allicin. (C) According to Cavallito’s hypothesis, allicin may attack cysteine residues on elongating amino acid chains while the protein is still being synthesized and is not fully developed [48]. In this early stage, cysteine residues that are normally blocked for reactions with allicin (compare B) are now potential targets. Possible results may be an abortion of translation or misfolded proteins with reduced or no function.