Garlic is considered as a functional spice because of its diverse array of nutritional constituents, phytochemicals, and fiber.

Generally, bioactive compounds are present in intact garlic, but, after chopping or crushing, a higher number of compounds, such as allicin, DAS, DADS, dithiins, and ajoene have been found after different types of chemical reactions.

This article mainly discusses the Bioactive Compounds of Garlic.

S-allyl-L-cysteine sulfoxide (alliin) accounts for approximately 80% of cysteine sulfoxides in garlic. When raw garlic cloves are crushed, chopped, or chewed, an enzyme known as alliinase is released. Alliinase catalyzes the formation of sulfenic acids from L-cysteine sulfoxides. Sulfenic acids spontaneously react with each other to form unstable compounds called thiosulfinates. In the case of alliin, the resulting sulfenic acids react with each other to form a thiosulfinate known as allicin (half-life in crushed garlic at 23°C is 2.5 days). The formation of thiosulfinates is very rapid and has been found to be complete within 10 to 60 seconds of crushing garlic. Allicin breaks down in vitro to form a variety of fat-soluble organosulfur compounds, including diallyl trisulfide (DATS), diallyl disulfide (DADS), and diallyl sulfide (DAS), or in the presence of oil or organic solvents, ajoene and vinyldithiins. In vivo, allicin can react with glutathione and L-cysteine to produce S-allylmercaptoglutathione (SAMG) and S-allylmercaptocysteine (SAMC), respectively.

Although little is known about their bioavailability and biological activities, non-sulfur garlic phytochemicals, including flavonoids, steroid saponins, organoselenium compounds, and allixin, likely work in synergy with organosulfur compounds. 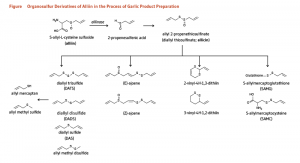