Fresh garlic extract, in which thiosulfinates appeared to be the active components, was virucidal to each virus tested. The predominant thiosulfinate in fresh garlic extract was allicin. Lack of reduction in yields of infectious virus indicated undetectable levels of intracellular antiviral activity for either allicin or fresh garlic extract. Furthermore, concentrations that were virucidal were also toxic to HeLa and Vero cells. Virucidal assay results were not influenced by cytotoxicity since the compounds were diluted below toxic levels prior to assaying for infectious virus. These results indicate that virucidal activity and cytotoxicity may have depended upon the viral envelope and cell membrane, respectively. However, activity against non-enveloped virus may have been due to inhibition of viral adsorption or penetration.

In the case of HIV, it is thought that ajoene acts by inhibiting the integrin dependent processes (Tatarintsev et al., 1992 ). Allyl alcohol and diallyl disulfide have also proven effective against HIV-infected cells (Shoji et al., 1993 ). No activity has been observed with allicin or S-allyl cysteine. It appears that only allicin and allicin-derived substances are active. Taken together, the beneficial effects of garlic extract make it useful in medicine. There are insufficient clinical trials regarding the effects of garlic in preventing or treating the common cold. A single trial suggested that garlic may prevent occurrences of the common cold, but more studies are needed to validate this finding. This trial randomly assigned 146 participants to either a daily garlic supplement (with 180 mg of allicin content) or a placebo for 12 weeks.

The investigation revealed 24 occurrences of the common cold in the garlic group compared with 65 in the placebo group, resulting in fewer days of illness in the garlic group compared with the placebo group. However, claims of effectiveness of garlic on common cold appear to rely largely on poor quality evidence (Lissiman et al., 2012 ). Many countries have used garlic extract for clinical treatments, but the untoward actions of garlic following long-term administration should be fully noted. Even though many studies on garlic and its derivatives have been performed, the exact biological mechanism of garlic extract still remains to be elucidated.

Additionally the composition of various commercial garlic products. Including garlic powder tablets and capsules, oil-macerated garlic. Steam-distilled garlic oils, garlic aged in anqueos alcohol. And fermented garlic oil was determined as well ass the virucidal activated of the products against herpes simplex virus type 1. and parainfluenza virus type 3. virucidal activities of commercial products were de-pendent upon their preparation process. Those products producing the highest level of allicin and other thiosulfinates has the best virucidal activities. 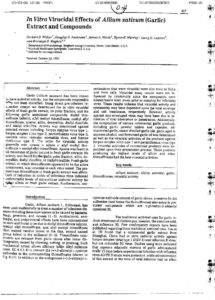